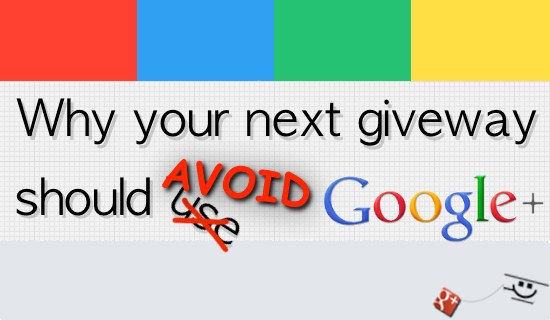 Are you running a giveaway by incentivizing entrants to use Google+ features and buttons, such as asking your readers to +1 a URL or add you to a circle?

A word of caution: you’re probably in violation of Google’s terms of service.

While it’s a feature that’s requested often, there’s a reason Google+ features haven’t been built into the Rafflecopter widget. In this post we’re going to highlight Google+, explain Google+ giveaway & contest rules concerning your promotions, and what to look out for when setting up your next giveaway.

By now you’ve heard of Google+, the social network that launched a little over a year ago that was supposed to ‘rival Facebook‘ (and depending on who you ask, maybe it does). Fast forward to August 2012, and Google+ is said to have over 250 million users. *thumbs up*

To control what kind of  experience Google users have on both their search engine and Google+, several guidelines have been put into place specifically around the topic of promotions, contests, and sweepstakes.

In November of 2011, Google launched Google+ Pages. Their equivalent of a Facebook Page, this is a place where brands and businesses could build relationships with those interested in connecting. It didn’t take long for folks to read through their page policies and find out how much involvement Google wanted in regards to your contests and sweepstakes.

The Google+Pages Contest and Promotions Policy document is very clear: you can link to promotions running elsewhere on the web, but the promotions cannot be run directly on your Google+ Page and you must release Google from any liability associated with your promotion.

With Google+ comes functionality similar to what Facebook offers: meet the Google+ Buttons, their equivalent of the Facebook Like Button. As millions of new users join the service each month, page owners and website owners are naturally trying to grow their circles and increase +1 button clicks.

If you have Google+ buttons on your site and you’re running giveaways, zoom in on the Google+ Platform Buttons Policy. Before you incentivize your readers to click the +1 or add you to their circles, read the following two policies below:

Publishers may not attempt to discover the identity of a Google+ button user unless the user consents to share his or her identity with the Publisher via a Google-approved authorization procedure. This prohibition includes identifying users by correlating Google+ button reporting data from Google with Publisher data.

Google makes it difficult for publishers to determine who has clicked on a +1 button and forbids you to attempt to find out who has clicked the +1 button unless this is done with your reader’s consent and through a Google authorized app.

Even though you’re allowed to tell/direct your readers to click the +1 button, Google doesn’t want +1 buttons clicked if it’s tied to some incentive, whether that be a prize you might win/receive or a payment.

You’re allowed to link to other promotions you’re running from your Google+ page, but that’s about the extent that Google wants to be involved. What’s the deal, Google?

Here are three thoughts that come to mind on why Google has taken this position:

It’s true: we’ve never heard of a Google+ page get banned for a promotion, either.

But I bet you’ve heard of sites getting hit without warning due to poor or black-hat SEO, whether it be through manual action taken by Google (remember when J.C. Penney was outed?) or through one of many recent search algorithm updates (get to know Google Penguin & Google Panda a little better).

Google has been known to take action on ‘questionable’ SEO tactics… don’t put your site at risk. Google+ features haven’t been built into the Rafflecopter widget and we plan on holding off should things remain the same.

Use caution when running promotions involving Google+ functionality. In fact, just don’t do it. While there’s always some wiggle room for interpreting these rules, tying an incentive to a +1 button, a Google+ badge, or a share button might have the potential to land you in ‘Google jail’.

Have any Google+ promotion policy predictions? Let us know in the comments!