*READ THIS* The contents of this article, written in 2014, could be outdated. Check out our Facebook Promotion Guidelines page for current info pertaining to sweepstakes on Facebook.

The day has arrived! 90 days ago, Facebook released a post stating that starting November 5th, apps that allowed for fan-gating content and incentivizing people to like your page would no longer be allowed. We’ve written a few blog posts on the subject, so if this is news to you, check out the following posts to catch up to speed:

In this post, we’ll discuss several changes you’ll encounter to the Rafflecopter platform over the next several days, a timeline of when to expect those changes, and some other FAQs we’ve received over the past three months.

The first update is that all fan-gates / like-gates will be removed from our Facebook app. If you’re running a giveaway on Facebook using the Rafflecopter Facebook app, the fan-gating functionality of the app will disappear. 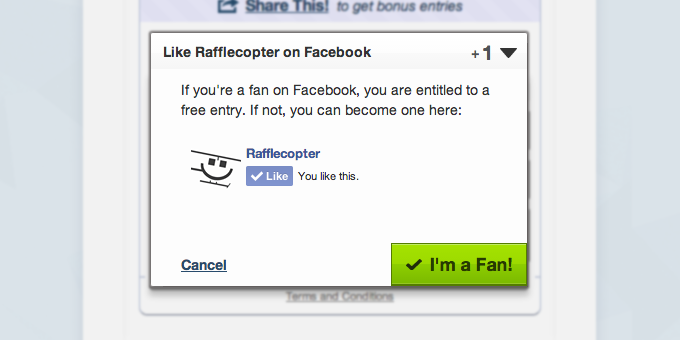 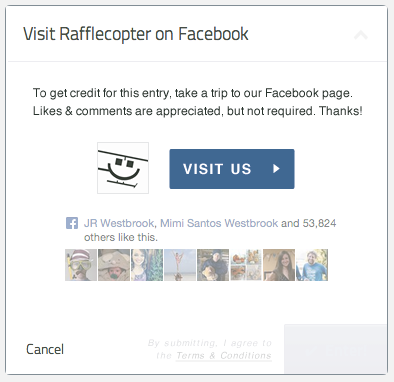 When you enter a giveaway with this entry option, you’ll only be able to complete the entry only once the specified Facebook page is visited. Once the ‘visit us’ button is clicked, you’re able to complete the entry. To stay within all Facebook guidelines, entrants aren’t incentivized to like your page (though they are encouraged to like and comment!).

This entry option is set up to help bring more attention to your Facebook page. It’s an exciting update that we think will help boost authentic interaction with your page.

These three updates listed above will be put into place in the evening of Wednesday, November 5th between 9pm and midnight EST. Once they’re updated, the fan-gate from our Facebook app will be removed for all giveaways despite when the promotion started or how far along it is. This is something set in place by Facebook that’s out of our control.

The ‘Like a Fan Page’ will be turned off at the same moment the ‘Visit a Facebook Fan Page’ will be activated. One entry option will be swapped with the other. Again, you can expect this to happen in the evening of 11/5.

We’ve received several questions over the past two to three weeks that we thought it would be a good idea to share with you. Of course if you have additional questions, feel free to comment below!

Q: If I have a giveaway running w/ the ‘Like a Fan Page’ entry option past 11/5, will Facebook shut down my page?

No. It’s not in Facebook’s best interests to just start shutting down pages, especially because of a promotion guideline infraction. It’s been rarely documented that Facebook shuts down pages for breaking their promotion guidelines (hence why you still might see a lot of giveaways that still incentivize entrants to share a post, even though that hasn’t been allowed for years). It’s a touchy subject — you wouldn’t expect Facebook to aggressively go after page owners.

If Facebook were to have a problem with the way the platform policy updates were interpreted and implemented by us in the Rafflecopter app, they’d email us first before emailing the folks using the app for their page. If they were to email us, we’d work with them to see that our giveaway widget is brought within their guidelines as they have done in previous years.

Any other questions or concerns you have for us that might have been left out? Feel free to leave a comment below!