You’ve heard it before — the CAN-SPAM Act. It has to do something about not spamming your email list, but what exactly does it mean? You googled it, only to land on a government website. After you get past the first paragraph, you think “too scary & dull… maybe I’ll read it later”.

We’ve been there too. It’s not a sexy topic to research and discuss, but the CAN-SPAM Act is often asked about how it pertains to running a giveaway. And it’s important to become familiar.

We’re here to make the topic bearable & break it down for you so you can walk away with a better understanding of what you can and cannot do. The CAN-SPAM Act is a U.S. law, however, even if you don’t live in the U.S., learning the fundamentals of this act will help you keep your email subscribers happier and give you confidence you’re growing your list correctly and legally.

What is the CAN-SPAM Act?

Relatively speaking, sending and receiving email was still in its infancy in the year 2000. And if you remember, receiving spam email back then was a little out of control. The CAN-SPAM Act of 2003 put rules in place surrounding the way you’re able to send emails for your business. The law was aimed to ensure businesses don’t send spam as well as to protect the consumer from receiving spam (after all, it is a law enforced by the Federal Trade Commission).

If you were curious, CAN-SPAM stands for Controlling the Assault of Non-Solicited Pornography And Marketing. It’s not just limited to email either, as SMS is covered under this law as well.

Keeping that in mind, here are the main requirements that encapsulate what the CAN-SPAM Act consists of. As you’ll see, the rules are fairly easy to understand:

Don’t use false or misleading header information. Your “From,” “To,”, and “Reply-To” must accurately identify who is sending the email.

Identify the message as an ad. Disclose clearly and conspicuously that your message is an advertisement, especially if it’s the first time you’re sending a communication to the receiver.

Tell recipients where you’re located. Your message must include your valid physical postal address. Could be your physical address, or could be your PO Box.

Tell recipients how to unsubscribe. Your message must include a clear and conspicuous explanation of how the recipient can unsubscribe from your communications.

Take care of unsubscribes promptly. If someone doesn’t want to receive further communication from you, you should take care of them within ten business days. You have to make it easy for users to unsubscribe (don’t make them jump through hoops, charge them a fee, or answer a survey before they do). Once they’re unsubscribed, you cannot sell or transfer their email address. 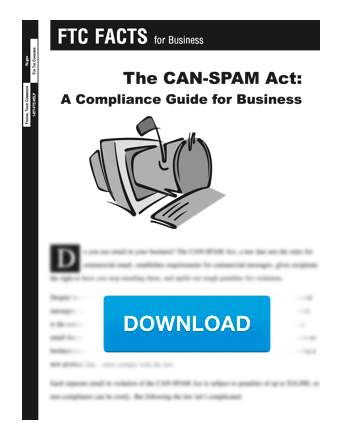 Monitor what others are doing on your behalf. Ultimately, you’re responsible for your email list. Even if you have an agency or a third-party company helping with your email list (that includes ESPs like MailChimp, SendGrid, etc), it’s your responsibility to make sure all your providers are staying within the guidelines.

That wasn’t too bad, was it? If you’re looking for a full explanation of the CAN-SPAM Act, your best bet is to get it straight from the FTC’s website here (you can even download a PDF of these guidelines).

The CAN-SPAM Act: The Legal Side

The rules behind the CAN-SPAM Act listed above almost seem like fundamental email marketing tactics in 2015. But think back 15 years ago: the internet was still relatively new and the laws surrounding the web were still being put into place. Email spam was a much bigger problem back then, so in 2003, George W. Bush signed the act into law.

Two years later after the act was made a law, the FTC reported that the volume of spam has begun to level off. Thanks to anti-spam technologies, less spam is reaching our inboxes. Spam is still a problem today, but it’s not as relevant as it was a decade ago.

On that note, it’s a tough law to enforce which can involve both the FTC, the ISPs, and state attorney generals each time there’s an incident. So who is getting in trouble from this law? No, it’s not your average marketer failing to remember to include their company address in their newsletter footer. We’re talking about offenders that are knowingly causing harm. Below we highlight three cases where punishments were handed out:

Meet 18-year-old Anthony Greco. In 2004, he created tens of thousands of MySpace accounts so that he could exploit security flaws that he had found in MySpace’s platform in order to send over nine million spam messages linking to pornography sites and mortgage sites. In trying to extort MySpace executives, he asked to meet with them in-person or else he’d tell other spammers about their flaws among other things.

When Anthony landed in Los Angeles to meet with MySpace Tom, he was immediately arrested. In addition to violating the CAN-SPAM Act, he was also charged with threatening to cause damage to MySpace.com’s computers with the intent to extort, and causing damage to a protected computer.

In 2004, Detroit-based company Phoenix Avatar sent spam email with the attempts to sell phony diet patches. The diet patches didn’t work (a clear FTC violation) and they tried to obscure where they were sending the emails from, violating the first of the seven guidelines listed above.

Four men were arrested in this incident. In addition to breaking CAN-SPAM laws, they were also in violation of federal mail fraud laws.

In 2008, ValueClick (now known as Conversant), got into hot water surrounding complaints stemming from sending deceptively labeled emails offering free gifts and prizes. Among other things, ValueClick failed to disclose that recipients had to spend a substantial amount of money to obtain the promised merchandise. They also failed to disclose these emails were an ad (see the third guideline above). They got caught and eventually settled with the FTC for a cool $2.9M.

There are other cases where companies have violated the CAN-SPAM Act, but this hopefully gives you a better idea of the kinds of folks that the FTC is looking for. These above cases show people blatantly breaking the law. They’re doing quite a bit to mislead their readers. While it’s still probably best not to push the FTC’s buttons, hopefully this shows you really have to be a criminal to get in hot water.

The CAN-SPAM Act: The Ethical Side

Hopefully by now, you’ve realized that maintaining CAN-SPAM compliance is fairly straightforward. If you feel like you’re ethically capturing and contacting your leads, you have little to worry about.

As long as you keep the following four bullet points in mind, you won’t run into any trouble:

Here’s an example of a CAN-SPAM compliant email: 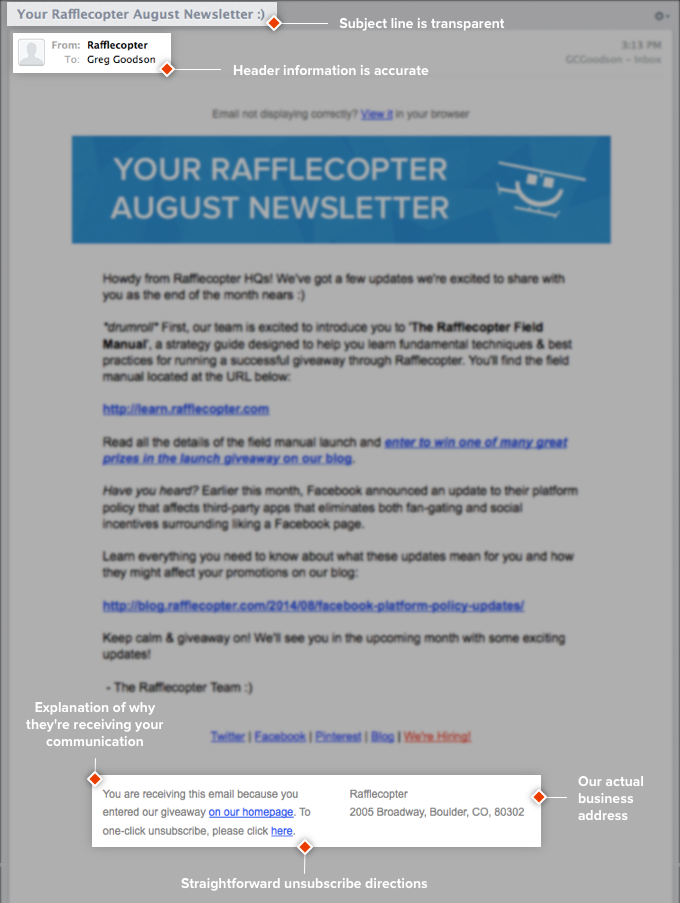 One of the biggest criticisms of the CAN-SPAM Act is that it neglects to actually tell any marketers not to spam. Believe it or not, the CAN-SPAM Act doesn’t prohibit buying and selling of email lists.

You’re then given one free shot at their inbox, at which point the owner of the email address will receive your email, and can ultimately decide if they want to unsubscribe or not.

But is this an ethical way to build your list? Perhaps not.

As a marketer, it’s up to you how you want to collect emails. Our best recommendation? Respect the inbox of others the way you’d like your inbox to be respected. Try to go out of your way to let those folks know that they’ll be added to your list. If you happen to deal with emails in large scale, you might want to keep a suppression list to prevent emailing those people who have already opted out in order to avoid making the mistake of emailing them by mistake.

So can you use the email addresses collected from your giveaway promotions? The short answer is ‘yes’. However, there are several ways to go about doing this in an ethical manner that will result in minimal unsubscribes, less spam reports, and happier customers.

Notify your entrants they’ll be added. If you’re running a giveaway and have the intention to add every entrant to an email list, be sure to tell your entrants in several places that this will be the case. Let them know that they’re welcome to opt out of the communications they receive from you with minimal effort.

The ideal location to mention this is in the terms and conditions section of your giveaway. You’re also best to mention this very clearly on the page where the giveaway is running. If your giveaways’ entrants are surprised to receive an email from you when you first message them, look into ways you can be more transparent. 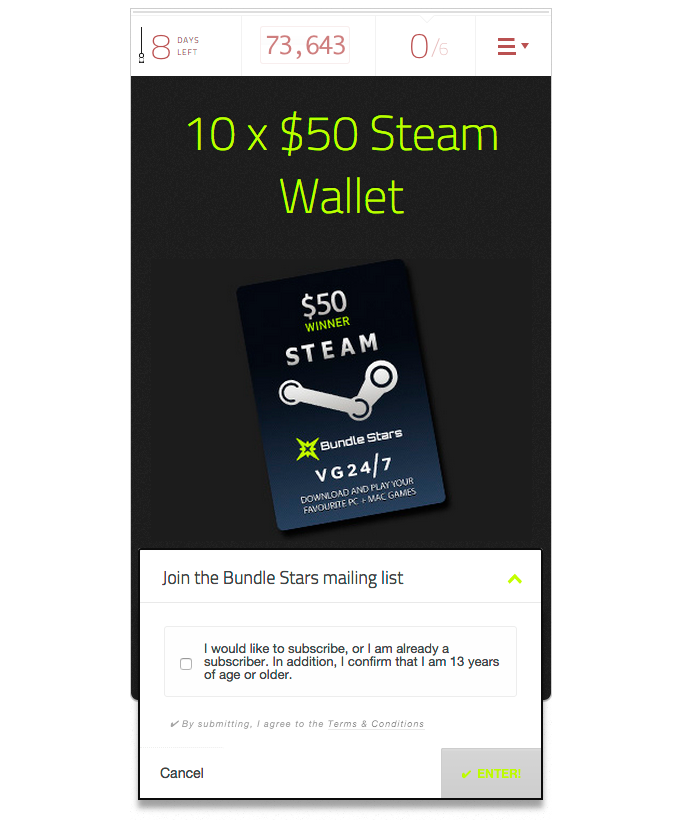 At the moment of writing this post, Rafflecopter integrates with nine email service providers. You can ask entrants to join your email list as part of a way to join the giveaway and with our integration, the entrant will be automatically added to your list, directly out of the widget. Additionally, Rafflecopter provides a list of all your entrants, including their names and email addresses they’ve entered with if you’d like to manually add them yourself.

Include why they’re on your list in your communication. Going back to the seven CAN-SPAM guidelines above, this loosely ties in with identifying the message as an ad. On your first communication to new subscribers, it’s a best practice to mention in the bottom of the email how they got on your list. A good place to mention this in the same area where you show how they can unsubscribe.

The CAN-SPAM Act is certainly not the most exciting topic, but hopefully the breakdown above helps you keep legal, ethical, and ultimately help grow and nurture your leads collected from a giveaway.