If you’re a Redditor, you know that getting to the front page is a big deal. This summer, that happened to us. Well… almost. It was the front page of a very popular subreddit.

The traffic results were still staggering: 8,000 new visitors in a matter of hours. But that wasn’t the biggest surprise.

If you’re not too familiar with Reddit, take some time and check it out.

You can think of it as a collection of message boards (known as subreddits) where through a voting system, the site’s users decide what content should appear at the top of each page.

As a Reddit user, you can post links to articles, or images, or text posts, depending on the situation. If you read a news story, come across an informative article you want to share, or have a funny picture of your cat that you think others will enjoy, you can share it by creating a Reddit post.

When creating a post, you’ll need to choose a particular subreddit to post it in (there are thousands to choose from). For conversation’s sake, three Reddit subreddits you might find me participating in are:

If other users find your post relevant and worthy of being seen by more people in the subreddit, it’ll be upvoted. The more it’s upvoted, the more visibility the post receives as it climbs the ladder.

The pinnacle of any post is for it to reach the front page of that particular subreddit. Icing on the cake? Have your post promoted to the main front page.

So yeah… you can consider Reddit a big deal.

Reddit receives over 200 million unique visitors a month, accounting for 7.86 billion monthly pageviews (source). There are close to 10,000 active subreddits. The level of difficulty reaching a subreddit’s front page is determined by how popular the subreddit is. The more popular it is, the more posts it will receive, making the front page more competitive.

The most active and popular subreddit at the time of writing is /r/AskReddit, a subreddit that allows users to submit questions which are answered by the community, with over 10 million subscribers.

The 92nd most popular subreddit? /r/FoodPorn, a community of culinary-obsessed posters sharing images and recipes of their newest edible creations, accounts for almost 415k subscribers.

From birdwatching, to college football, to scrabble enthusiasts, there’s a subreddit for everyone.

Reaching the Front Page of a Popular Subreddit

Waking up the morning of July 19th and checking on previous day’s site traffic, it didn’t take long to figure this is what happened to us. Viewing a traffic spike in Google Analytics with Reddit.com as the referring domain, it was clear Reddit was the culprit of thousands of new visitors to our site in a short amount of time.

‘Today I Learned (TIL)’ is a subreddit where users post facts that they’ve recently learned about. This is a subreddit that’s popular for its trivia and entertainment value. So popular, that /r/todayilearned is the 3rd most subscribed subreddit on the site with close to 9.9 million subscribers.

The responsible blog post: No Purchase Necessary & Giveaways: Everything You Need to Know

In late April 2015, we published an article on our blog that would help describe what the term ‘No Purchase Necessary’ meant for those running giveaways. It’s a topic that comes up semi-frequently in our support channel, and the content that was out there prior to writing this post was a bit outdated.

The post on Reddit itself: TIL that every sweepstakes must legally have a free method of entry, and you can get free McDonalds Monopoly pieces by mail.

Someone found their way to our blog post, learned a nugget of knowledge they felt like passing along, and went on to post about it on Reddit. 92% of the Redditors that saw the post upvoted it, and eventually the post reached the front page of the /r/todayilearned subreddit. Judging by inbound traffic we received, the post was on the page for no longer than 12 hours.

There are 25 posts on a front page of a subreddit. Unfortunately, we’ll never know exactly how high up on the front page it got.

First, I want to say that I’m pretty certain this post didn’t make the front page of Reddit (wouldn’t that have been nice?). The majority of Reddit traffic we received came from a combination of /r/todayilearned and some spillover traffic from /r/all (a board that’s an aggregate of other subreddits).

But the traffic was still significant, as /r/todayilearned is quite popular. The traffic spike shown in our Google Analytics account doesn’t even make sense visually — it’s too dramatic in relation to the amount of traffic that post receives on a daily basis. Regardless, here’s the spike in traffic and a breakdown of the days leading up to the post and a few days after:

The spike in traffic was certainly a welcomed surprise. However, judging by the Reddit post and looking at the engagement of those visitors that came from Reddit, my gut told me it wasn’t going to be something that would convert a lot of leads from the post itself. The bounce rate of those that visited from Reddit was 96.15%, where the bounce rate of those that arrive on this particular article from Google and Twitter are 89.45% and 84.25% respectively.

But look at this: the traffic we received from organic channels grew significantly after this post hit the front page.

If you’ve ever written a post with the hopes the post would be optimized around a few specific keywords, you know that it takes time for your post to climb the SERPs, particularly for a competitive keyword. It’s not surprising that as time goes on, organic traffic makes up the larger percentage of your post’s traffic.

But having this post featured on Reddit was the straw that broke the camel’s back. After July 19th, this article started ranking well for all terms surrounding ‘No Purchase Necessary’ pertaining to giveaways and sweepstakes. Fast forward to today: we rank first for the term ‘No Purchase Necessary’. In the last 12 weeks, 84% of the post’s traffic is due to organic traffic. Compare that to 55% in the first 12 weeks. 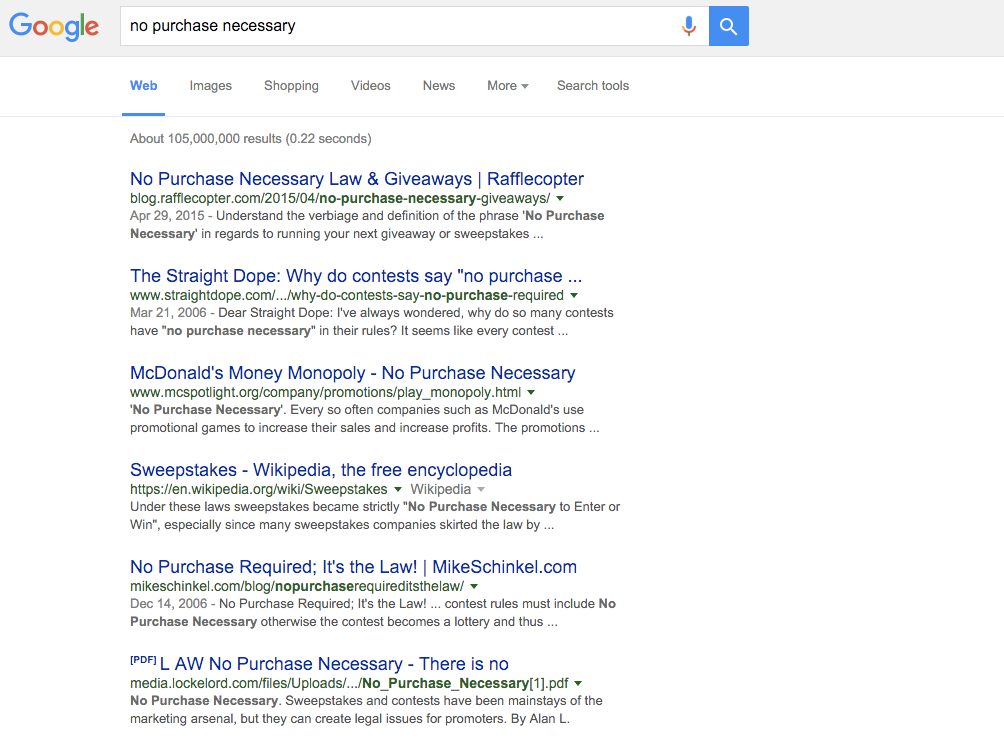 When I originally set out to write this article, one of the goals was to write an article that our users would could learn about the term ‘No Purchase Necessary’, and what the term meant pertaining to their promotions. As I stated earlier, it’s a topic that comes up a fair amount in our support channels. Wanting to act as a thought-leader on the subject, it made sense for us to publish this article.

But I knew it wasn’t a glamorous topic to write about. It was more of a research article. I had to dig into some PDFs and rules on the websites of the FTC and FCC (which sucked the life out of me). But I knew that this would be the kind of blog post that would gain momentum over time and be found primarily through search.

So I made sure to set up the post well from an SEO perspective from day one. Now that the post ranks first for our target keywords, we’re starting to see more inbound links to this post as a result. You could say it’s continuing to gain momentum.

That’s where I’m not certain I’m able to help. We don’t know the individual who posted our blog post on Reddit. Thankful for the traffic, we bought them 3 months of Reddit gold (it’s the least we could do).

Additionally, we’ve never gone out of our way to post any of our articles on Reddit. In this case, a reader stumbled upon this post on our blog two months after it was written, found some of the content particularly interesting, posted it on Reddit, and happened to get a lot of visibility.

But this post helped our search rankings. Six months after writing the post, it’s bringing in a good deal of traffic. And we have /u/sumguy720 to thank for that.