Share this on your wall and like our page and you’ll be entered to win! If you browse your news feed as much as we do, you’ve probably come across a contest or giveaway on Facebook that breaks promotion guidelines (as the above call-to-action does).

It doesn’t take long to find one either. From big companies with millions of fans down to startup mom-and pop-shops with only hundreds, there are many organizations on Facebook that either don’t know about Facebook’s promotion guidelines, or just choose not to follow them.

So how are these rules enforced? How come I’ve never seen any Facebook pages removed for breaking the rules? If my competitors are breaking the rules, why can’t I? In the post below, we’ll investigate these questions further to give you an idea as to why staying within Facebook’s guidelines is something you should do.

To better understand Facebook’s position on this, you should understand a few usage stats.

Love it or hate it, Facebook is here to stay, and short of your page going viral for one reason or another, it’s become more and more difficult to receive any worthwhile non-paid growth. Facebook is optimizing their revenue numbers at the mercy of your organic reach. If you want your page’s post to get any kind of visibility, paid advertising has become the way to reach your fans.

Knowing that, below are two reasons why breaking the rules won’t get your page instantly deleted.

Reason #1: It’s not in Facebook’s best interest to be hostile towards businesses.

Granted, there are rules in place for a reason, but unless you’re knowingly abusing their terms, it’s not in their best interest to remove your page or come down with a harsh punishment. If you’re running a giveaway requiring likes and shares, Facebook would be better off informing you of their rules versus throwing the book at you.

Here’s a scenario: suppose you move to a new town and rent an apartment in a new development. After living there for a month, you have some friends over to watch a movie on your new TV, and one of your friends brings their dog. The general apartment community isn’t pet friendly, and while you don’t own a pet, you don’t think twice when your friend asks to bring their dog. The next morning, you wake up to a knock on the door. Management is there to kick you out and they’re terminating your lease for breach of contract because you broke the rules.

Not terribly inviting. If word got out that the apartment community strictly enforced their policies in this manner, chances are you wouldn’t have moved there in the first place. If Facebook had this kind of rule enforcement, people would be hesitant to create a page, put significant effort into their Facebook page management, and spend money on ads.

Reason #2: It’s not easy to get FB’s attention for contest and sweepstakes rule-breaking.

While this might not have been the case in years past, it’s virtually impossible to report pages that are breaking promotion guidelines. It’s just another example of Facebook distancing themselves from promotions and putting all the responsibility on the page owner to make sure their promotion is up to snuff with all guidelines and laws.

Facebook’s optimized their ‘flag’ feature to look after more important concerns like abuse, spam, and intellectual property concerns. There is zero emphasis on flagging pages for breaking promotion guidelines. But as an end user interacting with a page, you’re able to report incidents at the page level and at the page post level.

Facebook gives you the ability to report any page by visiting the page’s settings in the menu and clicking on ‘Report Page’. 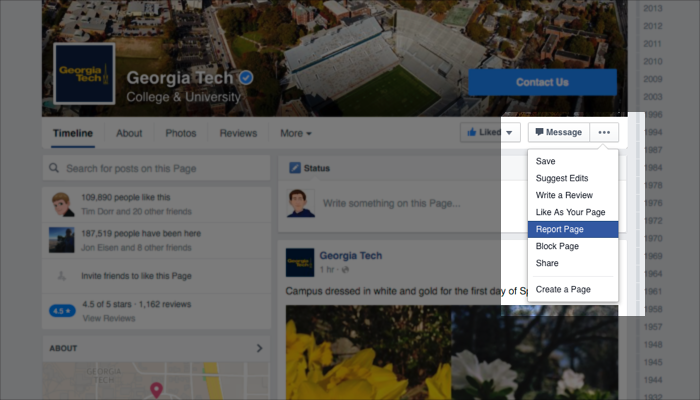 Here, you’re able to choose from 1 of 6 violations. 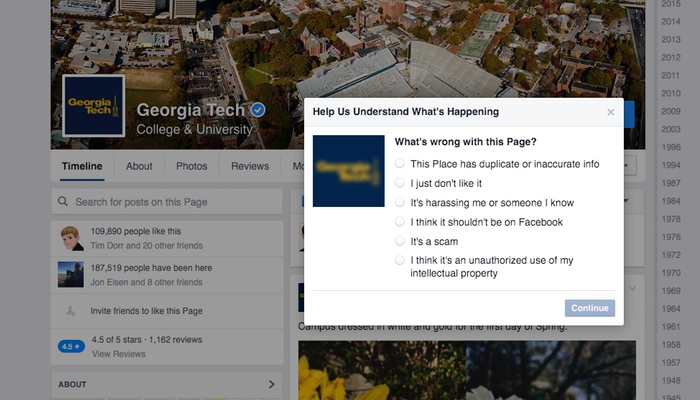 Regardless of which option you chose, Facebook will prompt you with other ways to deal with the situation yourself after they’ve been notified. 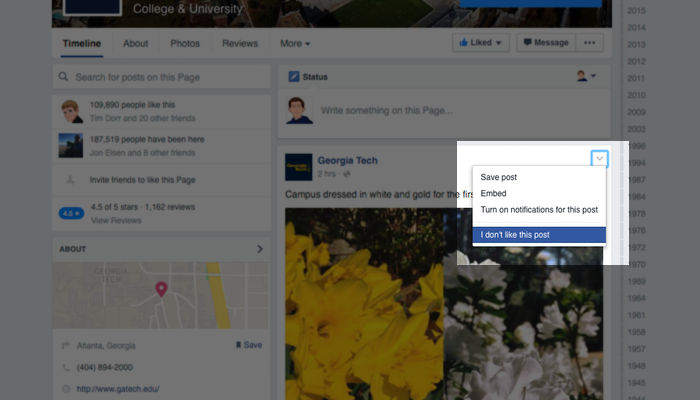 Here, you’re able to choose from 1 of 4 violations. 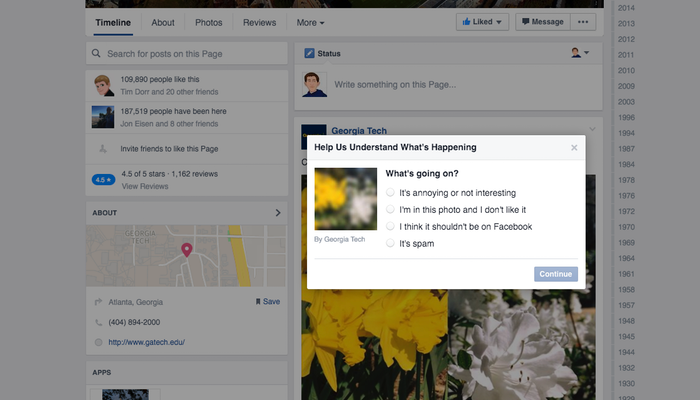 Like reporting the page, regardless of which option you chose, Facebook will prompt you with other ways to deal with the situation yourself after they’ve been notified. 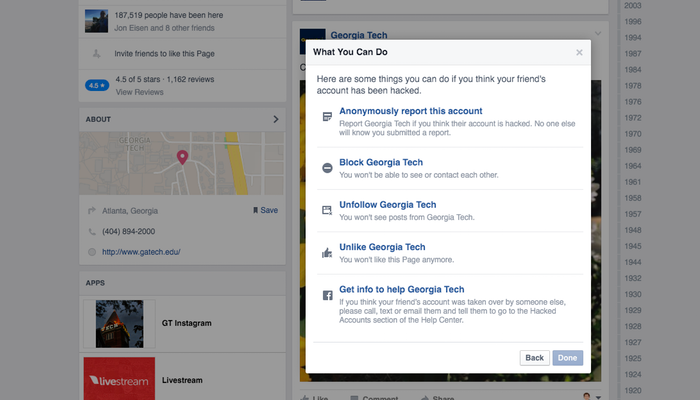 So what do you have to do to get Facebook to take action on an established Facebook page? Probably quite a bit. Perhaps more than you would think.

Pages that might find themselves in trouble would have to be in blatant violation of either Facebook’s Community Standards and/or their Statement of Rights and Responsibilities. If you’re running a promotion that is deemed harmful or threatening, that encourages hate speech or violence, that is deemed unsafe, or goes out of the way to disrespect trademarks and Intellectual Property, Facebook won’t be happy with you.

However, you still might get Facebook’s attention through consistent promotion guideline abuse.If you’re constantly running promotions that ask and incentivize users to tag, message, or share a post, you might get in trouble. If you run promotions that encourages fans to do things they wouldn’t want to do with their original account, but would do on a second account, you might get in trouble. If you’re running an illegal lottery and using Facebook posts to facilitate the entry process, Facebook might not be happy.

Again, it’s important to note that you would have to break these rules over and over and over again before Facebook might message you. If you run a giveaway that breaks their promotion guidelines once and never again, you probably wouldn’t expect any repercussions.

Depending on how many times you’ve been in violation or how egregious your violation is, there are a few actions Facebook could take on your page. These actions aren’t official by any means. They are based off of our experience from watching sweepstakes and contests run on Facebook the past five years.

In the words of Andy from The Office, you might receive a strongly worded letter. If your violation is relatively minor and if Facebook thinks it’s worth their time to send you a note reminding you of their rules, this is the easiest and most lenient way to inform you of your violation.

We’ve seen some examples where entrants have been restricted in their page likes.

“One of my entrants contacted me to let me know that she had received a notification from Facebook stating that they had cleared all her page likes for the past 30 days and that she was now being prohibited from liking any other pages for the next 30 days. She informed me that most of her recent page likes had come from several giveaways including mine. What happened?”

After some investigation, it turned out the giveaway admin had a giveaway asking entrants to like up to 50 pages. Needless to say, it was a bit excessive. Instead of punishing all 50 pages involved, Facebook decided to punish the participants, which had an adverse effect on the pages involved.

We’ve heard it all before – my competitors break the rules all the time. It’s not fair – why can’t I do that? Ultimately it’s your page and your call. But that’s probably not the best attitude.

It’s like speeding. Everyone might go 5 to 10 miles per hour over the speed limit, but if you get caught, you’re still breaking the law. It’s up to you to decide how far you want to stay within the rules or how much you want to push the envelope.

But, before thinking about breaking the rules, know this: your entrants are smart and those who are entering your promotions are more social media savvy than ever. To take a quote directly from the comments of our Facebook promotion guidelines page, Anastasia asks:

“As someone who enters lots of giveaways, it’s frustrating having to Like pages, share on my timeline and tag friends, knowing that it’s actually against the rules! Is there something we can do about pages that “force” shares, tagging and page likes as a means of entry? Or are we just stuck until Facebook intervenes?”

“You can always report the pages to Facebook or kindly point the person running the giveaway to Facebook’s Promotions Guidelines, though it’s often NOT going to be well-received, to be honest.

Your best bet is to just skip them. Don’t enter them.

There are more than plenty of giveaways out there to keep you busy if you skip over the questionable ones.”

It’s great advice to follow. Entrants are getting better at recognizing when a giveaway is legitimate, and when there might be something askew. Running a giveaway in violation of Facebook’s guidelines (such as asking entrants to share, like, or tag a friend) can be viewed as a page trying to get an edge while exploiting users, in place of spending advertising dollars.

As an entrant, you should also know that if you see a page running a giveaway asking for a page like, a share, or to send a message, it’s close to impossible to verify all those entries. Be skeptical of pages that run promotions in that fashion. 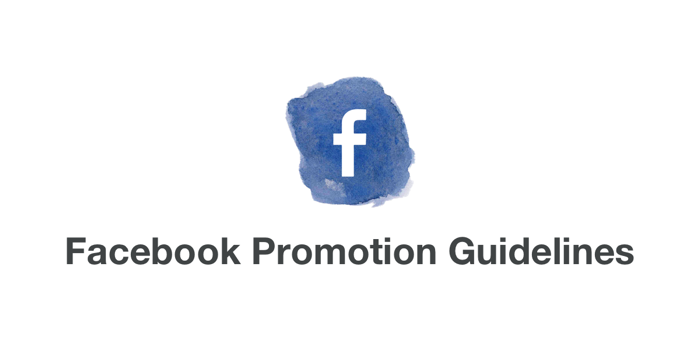 Over the past 5 years, Facebook’s promotion guidelines have changed a handful of times. And each time they’ve changed, we’ve written a blog post describing the updates and how you’ll be affected by them. These posts always seem to drum up a lot of questions and comments, even long after they’ve been published.

Because of that, we’ve put together the Facebook Promotion Guidelines & Giveaway Rules Guide, a digestible breakdown Facebook’s promotion guidelines that will help you understand what is, and isn’t allowed.

Added to the bottom of the guide is a comment section where you’re welcome to start a conversation or ask a question pertaining to the rules.

As Facebook’s rules and terms evolve, this page will be updated with the latest and most up-to-date information. We hope this helps you navigate Facebook’s terms so that your next promotion stays within the rules.

Given that Facebook’s such a big platform and here to stay for some time, it’s worthwhile to understand the rules and regulations surrounding their platform and how they pertain to your promotions.

Have any questions about what’s allowed or want to share a story? Post it in the comments below!