If you’re on the fence about what prize to use for your next giveaway, I’ll let you in on a little secret: make the prize kick ass.

Let’s look at why prize selection is so important to your success. We’re going to look back at the giveaways we’ve run over the past four months to give you an inside look at how they were administered, their results, and understand the relationship between the amount of engagement you can drive by giving away a bigger and better prize.

Our Past Four Giveaway Prize Selection

Before we get to the meat and potatoes of this article, it’s important to get a high level overview of the four giveaways we refer to throughout this post. At any given point, we’re running a Rafflecopter giveaway of our own. We do it for a handful of reasons, but mainly so those who are unfamiliar with how our platform works can see how the entry form functions.

We always keep this promotion simple. The giveaway lives on a monthly giveaway landing page that has easy-to-follow directions, an entry form with three ways to enter, and a video on the bottom of the page. We do change it up slightly here and there, but keeping it in a standard format like this serves.

Below is a brief description of each of the past four giveaways we’ve run. You’ll learn about the similarities and differences between each, and why two of the four giveaways seemed to stand out in terms of performance and engagement. 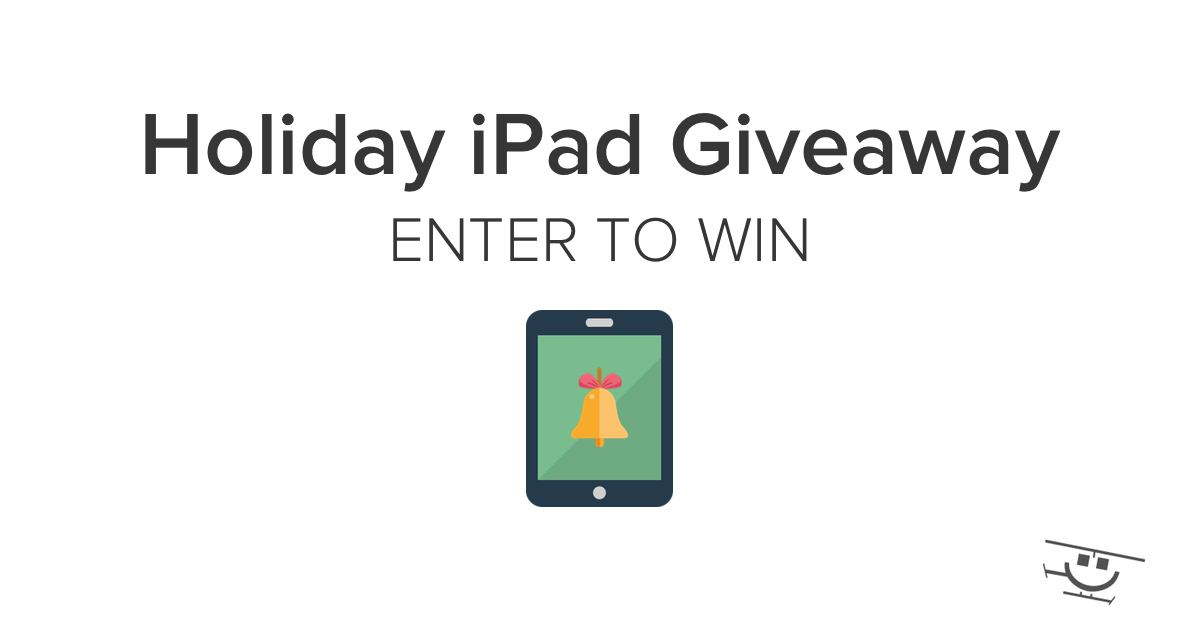 The “Holiday iPad Giveaway” was run to celebrate the holiday season and ran for 42 days, from November 4th through December 16th. We wanted the giveaway to run over the course of the holiday shopping season, but also wanted to make sure it ended early enough to get the prize to the winner before December 25th.

This giveaway was tweeted from our account 51 times, shared on our Facebook page four times, and mentioned in two of our newsletters. Because of the nature of when this giveaway was run and the prize we were giving away, we put a little more effort behind promoting this than our next three giveaways.

Want to get a breakdown of all the tactics used for the Holiday iPad Giveaway? Check out our recent blog post on giveaway promotion strategies here. 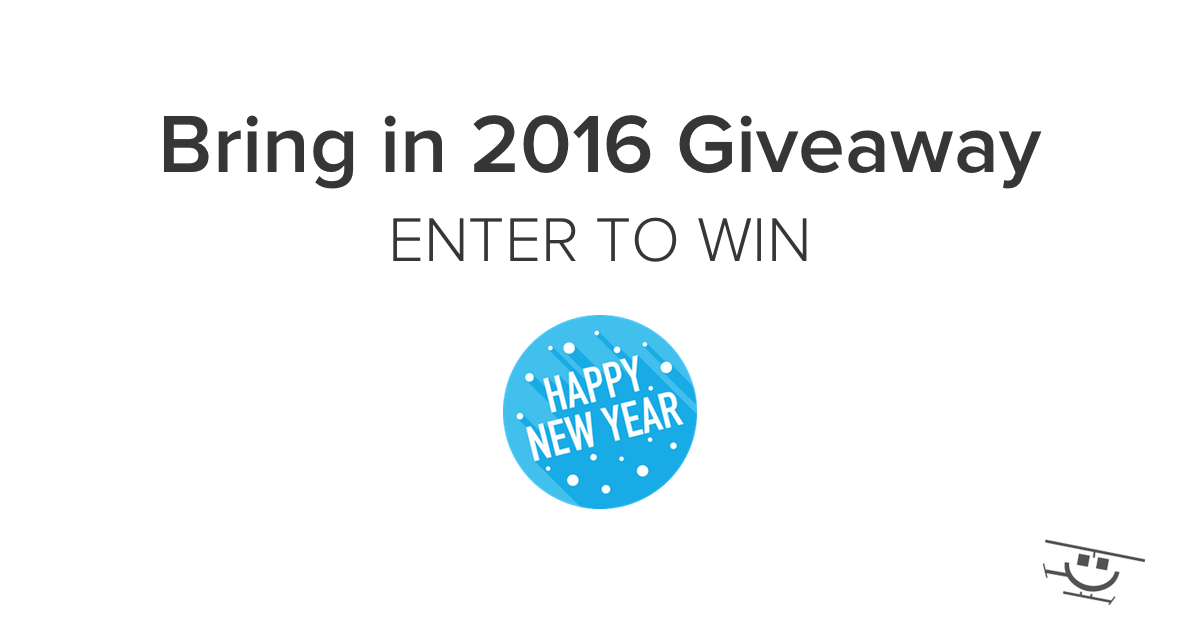 The “Bring in 2016 Giveaway” was run to celebrate the new year and ran for 37 days, from December 20th through January 26th. Three prizes were given out. One grand prize winner received an annual subscription to Rafflecopter’s premium subscription and Rafflecopter swag accounting for an ARV of $799/ea.

This giveaway was tweeted from our account 20 times, shared on our Facebook page three times, and mentioned in one of our newsletters. 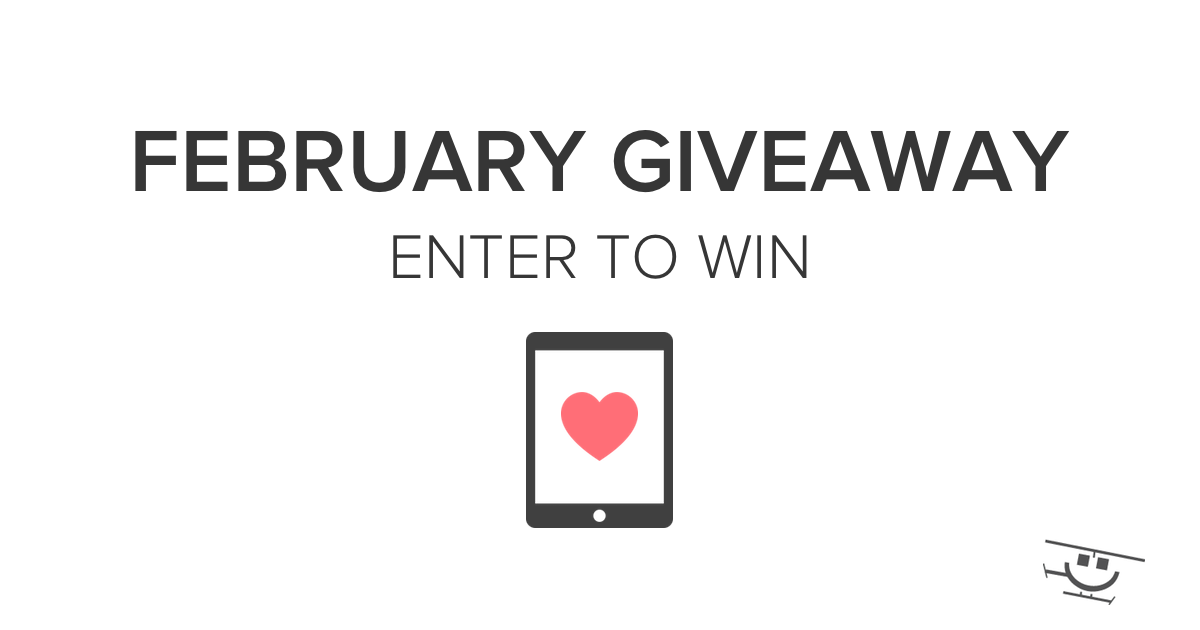 The “February iPad mini Giveaway” was run to celebrate the month of February and ran for 33 days, from January 28th through February 29th. We wanted the giveaway to run over the course of the month and have a ‘Valentine’s Day’ theme.

This time, only one prize was given out. One grand prize winner received an Apple iPad mini 2, a one-month subscription to Rafflecopter’s premium subscription and Rafflecopter swag accountin
g for an ARV of $369/ea.

This giveaway was tweeted from our account 35 times, shared on our Facebook page two times, and mentioned in one of our newsletters. 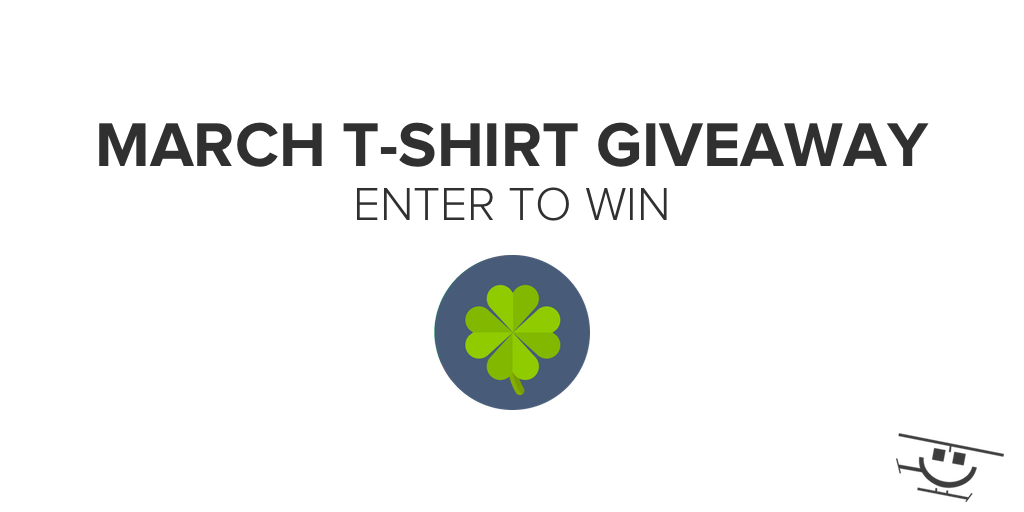 The “March T-Shirt Giveaway” was run to celebrate the month of March and ran for 31 days, from March 1st through March 31st. We wanted the giveaway to run over the course of the month and have a ‘St. Patrick’s Day’ theme.

This giveaway was tweeted from our account 20 times, shared on our Facebook page two times, and mentioned in one of our newsletters.

What were the differences between the four giveaways?

Though our monthly giveaways stay relatively consistent each month, a few things were different about each promotion.

Prizes. This was undoubtedly the biggest difference between each giveaway. In the December and February giveaways, iPads were given out as grand prizes. The other two giveaways’ prizes were Rafflecopter t-shirts, swag, and various premium Rafflecopter subscriptions.

Timeframe. In general, the timeframes were somewhat close, but the December giveaway ran for a bit longer than the others at 42 days. January, February, and March giveaways all ran for 37, 33, and 31 days respectively.

Seasonality. You could make the argument that a giveaway might perform better during a time when the internet receives more traffic. Maybe our January giveaway, while running for 37 days, didn’t perform as well because it ran during the week before and after Christmas, a time when internet traffic tends to drop off.

How they were promoted. Each giveaway was promoted a bit differently. Admittedly it’s easier to write more attractive copy when your giveaway prize is significantly larger and it’s celebrating a specific occasion. Our December giveaway received more promotion than the others.

What were the similarities between the four giveaways?

To reiterate, we keep things consistent month to month. It makes it easier for us to streamline the process and make sure we can get a giveaway up and running immediately after the previous one has ended.

Entry options. Each giveaway presented participants with three ways to enter: tweet a message, sign up for our email list, and answer an open-ended question. The refer-a-friend entry option, which allows entrants to receive additional entries when people they share the giveaway with also enter, was also activated for each giveaway.

Tweets. When we run a giveaway, we’ll generally set up a handful of tweets to be sent over the course of the promotion. Some of the copy is updated, but much of the tweets published are consistent from one giveaway to the next.

How they were promoted. While we stated above that each giveaway was promoted a bit differently, in the grand scheme of things, there were a lot of similarities in promotion messages for each giveaway. Each promotion was included in a monthly newsletter, shared over Facebook several times, and was tweeted about four to six times a week.

Below is a quick analysis on the giveaways we described above, comparing each giveaway side by side (click the image to view full size). 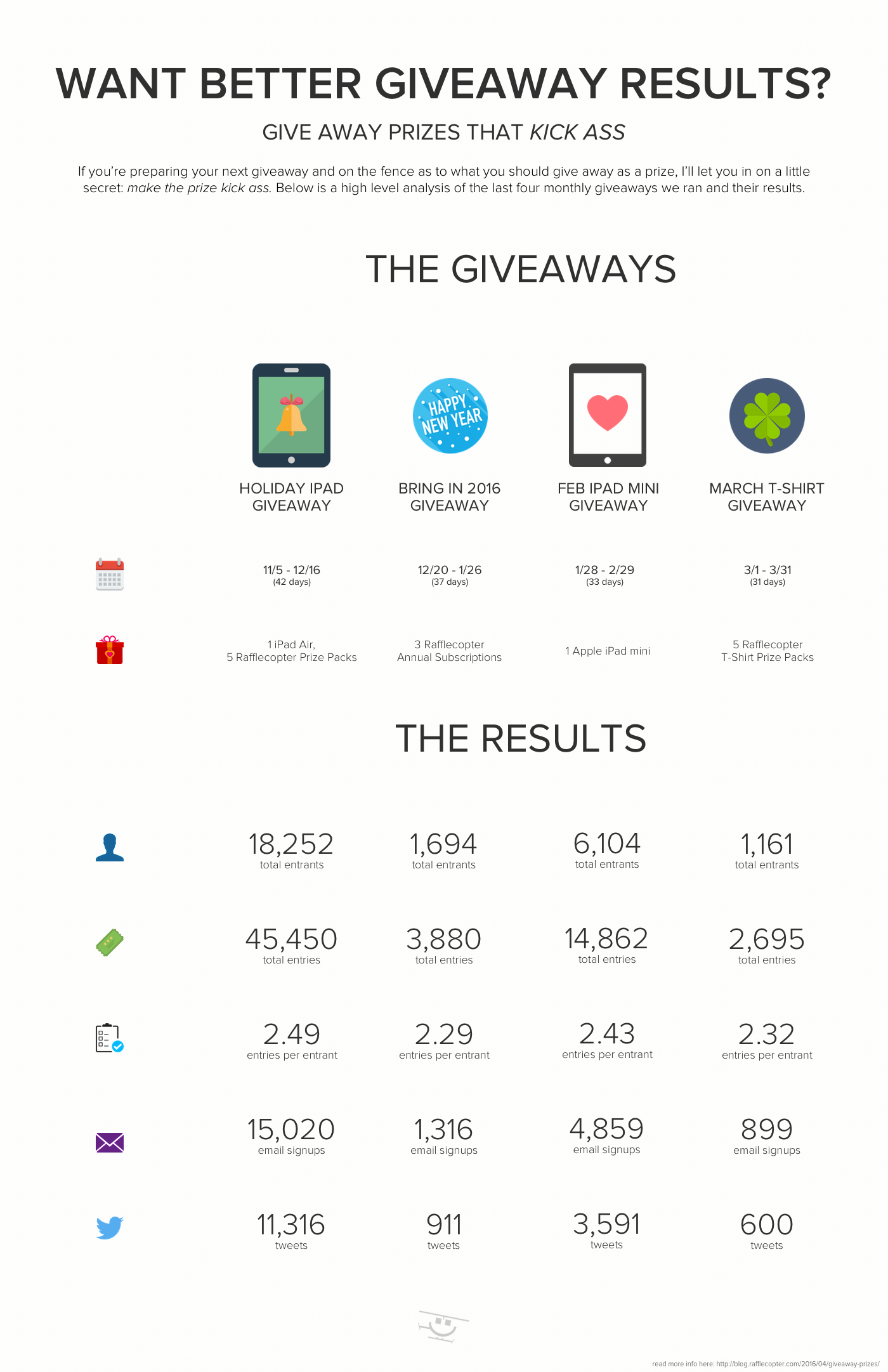 The number of entrants and entries was much greater in the December and February giveaways. Looking at the number of entries submitted per entrant, it’s interesting to note that entrants were more compelled to complete all three entry options in the giveaways where the prize being given away was more attractive.

Tweet engagement. Over the course of these four giveaways, we tweeted 126 messages pointing to our monthly giveaway landing page. Looking at our Twitter analytics, the engagement rate for each giveaway is listed below:

There’s a noticeable increase in engagement for the giveaways messaging a more attractive prize.

The amount of excitement. Okay, so there’s nothing scientific about this statement but… when you run a giveaway with a bigger prize, you can usually tell if your followers are excited or not. If you give away an attractive grand prize, you should know if it’s a great prize shortly after launch through social chatter, emails, and hopefully number of entries received.

No matter the prize, the administrative time required could be the same across your giveaways.The amount of effort put into promoting our February iPad mini giveaway compared to our March T-Shirt giveaway was very similar, yet the February giveaway received five times the engagement. If you’re already taking the time to set up your giveaway, your promotion schedule, emailing winners and shipping prizes, etc, giving away a bigger and better prize will make your efforts go that much further.

You should be thinking about your giveaway objectives as well. Sometimes collecting leads is a priority. Sometimes it’s traffic. Other times, it’s just to have fun. When we run a flash giveaway on our Facebook page for example, we’re not looking to grow our email list or drive traffic to a landing page. Usually we’re doing them for fun, for general Facebook engagement, and to celebrate our fans. You don’t need a huge prize to do that. It’s important to choose a prize that matches your goal.

Planning on running some paid advertising campaigns promoting your giveaway? Your bang for your buck will go much further when advertising a giveaway with a prize of larger value. If you’re measuring the success of your giveaway on a cost-per-lead basis for example, you’ll more than likely find that giving away a bigger and better prize will help reduce that number.

Apply This To Your Next Giveaway

Of course there are other outside factors that could have played a role into the reasons why our December and February giveaways performed so much better. How much seasonality played a role, we’ll never know for sure. And the giveaway we ran in December did receive a little extra love (read more about those giveaway promotion strategies used here).

But c’mon. Look at the infographic above! There’s definitely a correlation between the prize value and the amount of participation your giveaway receives. It seems obvious in hindsight, doesn’t it? For your next giveaway, put some more umph behind your giveaway prize selection. You might be surprised… :P

For the month of April, we’re giving out a $250 Amazon Gift Card as the grand prize. Time will tell us how it compares!

Have any experiences similar to ours? Share them in the comments below!