Maybe you’ve read over Facebook’s promotions guidelines. Maybe you tried reading them, but got scared by the “lawyer speak”. Since Facebook revised these guidelines a month ago, there has been a lot of back and forth on what’s allowed and what isn’t.

*READ THIS* The contents of this article are outdated. Check out our Facebook Promotion Guidelines page for current info. 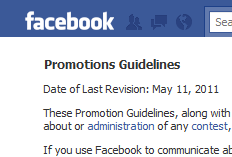 Some folks say that these recent guideline changes are in favor for Facebook page admins in relation to what they were like a few years ago… I tend to agree. Believe it or not, Facebook promotions have been able to only be run on 3rd party apps on a canvas page or a page tab for over a year – this isn’t a recent update.

Let’s break down the eight rules of Facebook’s promotion guidelines one by one. After each rule, we’ll explain it in simple terms:

Rule 1: Promotions on Facebook must be administered within Apps on Facebook.com, either on a Canvas Page or an app on a Page Tab.

If you run a promotion on Facebook, use a canvas page or a page tab, which is a page that can be linked to under your page’s profile picture. You can do this by using a 3rd party app, whether that be a specific sweepstakes application, or an iFrame app which allows you to host HTML-based landing pages in the tab.

Facebook doesn’t want to be held liable for anything that might happen due to your promotion. To best follow rule two, include a few sentences in your promotions. We recommend: “This promotion is in no way sponsored, endorsed or administered by, or associated with, Facebook. We hereby release Facebook of any liability.”

Rule 3: You must not use Facebook features or functionality as a promotion’s registration or entry mechanism.  For example, the act of liking a Page or checking in to a Place cannot automatically register or enter a promotion participant.

You can’t have a promotion where you automatically enter someone into it when they like your page unknowing to them. If you walked into Taco Bell and we’re automatically entered into a sweepstakes where you could win 100 Tacos a day for a year without you knowing, how would that make you feel? (well, I guess that’s not the best example, depending on who you are :))

You can have someone “like” your page or check in to a location to enter your promotion, but that’s it. You can’t force them to like a wall post, post a newsfeed, invite friends, update their status, etc. You can ask them nicely to help share your promotion, but you cannot require them to, or give them added incentive to.

Rule 5: You must not use Facebook features or functionality, such as the Like button, as a voting mechanism for a promotion.

This rule could get a little confusing, but what this means is that you can’t have the like button act as the way to gather votes. A common example: you cannot say “the picture with the most likes wins. vote on your favorite picture by clicking the like button underneath the picture of your choice”. That’s against Facebook’s guidelines. Don’t confuse this with rule 4 – you can still have people “like” your page to enter a contest or sweepstakes. Using it in this regard isn’t illegal because there’s no voting associated with the like button.

Again, Facebook doesn’t want to be held liable. Notify winners by email, phone, twitter, in person, whatever. Just don’t let Facebook catch you notifying the winner on their platform. You can however post something like “Everyone give congrats to John Smith for winning our $50 gift card promotion!”

Rule 7: You may not use Facebook’s name, trademarks, trade names, copyrights, or any other intellectual property in connection with a promotion or mention Facebook in the rules or materials relating to the promotion, except as needed to fulfill your obligations under Section 2.

Not really a rule, just some definitions. Fairly straightforward – explains their definitions of “administration”, “communication”, “contest”, “competition”, and “sweepstakes”.

Everyone wants to run promotions on Facebook. Many folks still break the rules though. So just how risky is it to step outside the guidelines? There are always risks involved. While we don’t suggest you break the rules, I’ll set up two scenarios:

Suppose you have a Facebook page called “My Magical Postcard Corner” based around postcard collectors that is running a giveaway to your 225 fans. You’re running it by asking users to upload photos of their favorite postcard onto your wall. The photos are then collected into an album, and the photo that gathers the most “likes” wins a prize – ten postcards from my postcard collection. I’ve even found a way to reward users more votes for their photo every time they share it on Facebook. I contact the winner through a Facebook message and mail them ten of my postcards via snail mail. Almost everything about this contest I ran was against Facebook promotions guidelines. However, with 225 fans on Facebook and a harmless prize, it would be unusual to see Facebook take action and ban my page because I broke their rules.

Now pretend you’re a backyard trampoline company (you probably see where I’m going). You have over 100,000 fans on Facebook and for sake of argument, fifteen competing trampoline retailers who have between 5,000 and 90,000 fans follow you very closely and wouldn’t mind if you were to “disappear”. If you run a contest where you ask your fans to upload user generated videos of them performing acrobatics , the chances that you’ll be banned is high. Your competitors would jump on the opportunity to report this to Facebook. It’s a no-brainer for Facebook to shut you down. You’re breaking the rules, and it’s only a matter of time before someone who gets injured in filming a video comes after you with a lawsuit, dragging Facebook into it.

When Facebook asks you to keep your promotions on canvas pages and 3rd party apps, its because its the best way for Facebook to allow pages to run promotions on Facebook while keeping them at a distance.

Is it legal to force someone to ‘like’ your page before entering a contest?

Forcing someone to “like” your page before entering a promotion is completely legal. Rule 4 above states that “you must not condition registration or entry upon the user taking any action using any Facebook features or functionality other than liking a page or checking into a place.” As we stated above, you can force someone to “like” you or check in to enter, but you can’t force them to like a wall post, post a newsfeed, invite friends, update their status, etc.

Any “wall promotion” you see is not legal. A wall promotion includes posting a question on a wall post and the first person to comment with the right answer wins. It also includes any contest where photos are uploaded directly to the wall rather than a third party application. Basically, any type of contest that requires commenting on or responding to items that could be found in the news feed. However, if you enter a contest, and then are presented the entrant to share the giveaway by their own free will, that’s fine. Again, this is to protect Facebook.

What about giving away a product once I hit ‘x’ amount of fans?

You are allowed to announce to your fans that you’re having a sweepstakes or a contest once you reach a certain amount of ‘likes’. Just make sure that the contest follows all the rules above.

Nope – not allowed. This would be conditioning an entry based on a share, making it illegal.

What if the giveaway is being run somewhere else other than Facebook (for example, on your blog)?

If you’re running it on your blog, and you may be able to get away with it.

You might not be happy with the rules. They probably could be more cut and dry. But did you know that 18 months ago, Facebook required you to get written approval to run promotions. The only way to get written approval was to have an account rep. The only way to get an account rep was to spend $10K on advertising on Facebook. Bummer! Back then, Facebook also asked to notify your account rep 7 days prior to running a promotion. So on the bright side, at least the rules in place now aren’t as unrealistic as they used to be.

With this new found understanding of Facebook rules and regulations, run your Facebook promotions with more confidence and don’t worry about if you’re breaking any rules. Instead, interact with your fans and have fun! That’s what it’s all about.