This is a guest post by AK Stout, who is a social media consultant and owner at Saying It Social, LLC. She is also the co-host of Social Geek Radio, where she discusses the use of social technologies on today’s web. Follow her on Twitter, or connect on LinkedIn. 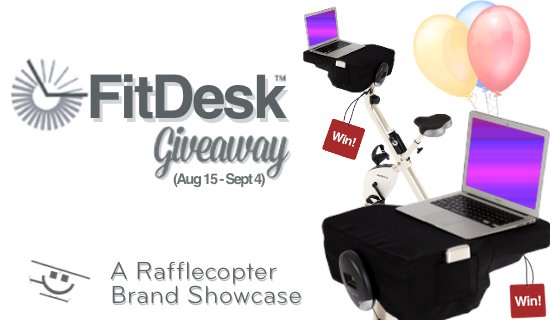 I love my job but up until a few months ago it was slowly killing me. That may sound a bit crazy coming from a gal who merely sits in front of a computer all day but multiple reports over the past several weeks point to the “couch potato” lifestyle as a pandemic, claiming over 5 million lives every year.

Any extended sitting – at a desk, in front of the television or behind the wheel – threatens our physical well-being in multiple ways that even occasional trips to the gym cannot significantly offset. The solution, according to many researchers, is to sit less and move more every day.

Sure that sounds like a simple solution in theory, but what if your job just doesn’t lend itself to much more movement than typing or occasionally shifting the computer mouse from side to side? Luckily a few years ago, the folks at Revo Innovations had our best interests in mind when they designed the FitDesk, a lightweight exercise bike that allows users to work on a laptop, surf the internet, correspond via email or otherwise work while enjoying the healthy benefits of an active lifestyle.

When I found out about the FitDesk I had to have one – there was no question about it. I could continue sitting still all day, doubling my risk of death, or get a FitDesk and pedal my way to healthy computing.

After using my FitDesk for just a few days I fell in love with not just the concept and the product but with the company culture and their mission as well. Fortunately [for me] the fine folks at FitDesk were looking to add a Social Media Marketer to their team and I was honored to be able to fill that roll. I feel so lucky to be able to spread the word about something that really makes a difference and helps people live healthier lives. 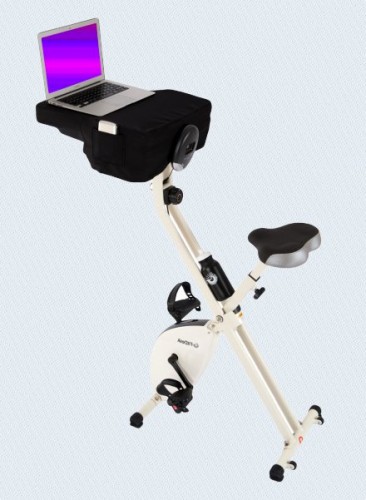 One of my favorite things to do as part of the FitDesk team is partner with other companies and bloggers to give away FitDesks. The more people we can let know about the FitDesk the better, and nothing seems to get people more interested and more involved than a good old fashioned giveaway.

(You just figured out where I’m going with all this, didn’t ya?)

When we partner with companies and bloggers for giveaways we want to make sure that the giveaway is mutually beneficial; that both entities will gain more exposure, more social media followers, etc.

After much careful research, it was overwhelmingly clear that for the cost (free or $99 for white label) Rafflecopter offered everything that we needed to run a successful online giveaway in conjunction with another company or blogger.

From ease of set up to customizable entry options, embeddable widgets, and a stream-line Facebook app, Rafflecopter’s got it all.

I was thrilled when the Rafflecopter Facebook app was unveiled. Not only was it super easy to install (I think it took one, maybe two clicks to get it loaded onto the Facebook Page), but the guys at Rafflecopter were kind enough to leave blank HTML spaces at the top and bottom of the widget for your own messaging, branding, and customization.

One of the reasons I love having the Rafflecopter app added to the Facebook Page is because it gives people a reasons to ‘Like’ your Page. When someone stumbles upon your Page and sees the “Giveaway” titled app, even if you don’t have a live giveaway at that moment, they at least know that you run giveaways and may ‘Like’ your Page just hoping that you’ll do another one soon.

We recently worked with a company who was going to do a FitDesk giveaway with us and they were always accustomed to running their giveaways the “wrong way” on Facebook (more about that here) so I quickly advised that it would be in both of our best interests to go the Rafflecopter app route instead. After the giveaway they wrote to tell us that by using the Rafflecopter app they received more than 4,000 entries compared to the usual 500 or so they were getting with their “other” method on Facebook.

Want To Win a FitDesk? Here’s Your Chance!

Needless to say, we’ve been thrilled with the exposure that Rafflecopter has helped bring to the FitDesk. We are so thrilled that we wanted to do a little something to show our appreciation… So, we have two FitDesks to give away to YOU, fellow loyal Rafflecopter fans and supporters.

No Purchase Necessary. Due to shipping restrictions, winner must have a US or Canadian address. To enter the giveaway, sign in and answer the question in the Rafflecopter widget below by letting us know why you want to win a FitDesk. You can also follow FitDesk on Twitter, tweet a message (+1 per daily tweet), leave a comment on the Rafflecopter blog for additional entries. If you’re a fan of FitDesk and/or Rafflecopter on Facebook, you’ll also be eligible for an additional entry as well. Giveaway ends just after Labor Day… Tuesday, 9/4 at 12:01am. Two winner will be chosen and shipped a FitDesk. So… what are you waiting for?

Enter The Giveaway Below!

AK has worked with Rafflecopter over the past 3 months and has helped us understand how a business like FitDesk operates via social media. AK also manages the social media initiatives for FitDesk. We reached out to AK to see if she and FitDesk would like to be featured brand on our blog. We’re disclosing this in accordance with the Federal Trade Commission’s 16 CFR, Part 255: Guides Concerning the Use of Endorsements and Testimonials in Advertising. Abiding by the FTC blogger guidelines is important to us; we just want to be transparent :) 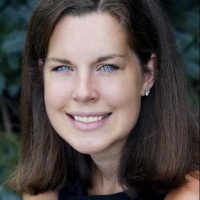 AK Stout is the owner of Saying It Social, LLC. She's also a Social Media Trainer, Consultant, and Speaker. Follow her on Twitter @AKStout18