Howdy from Rafflecopter HQs and a Happy 2014! We hope the new year brings you such joy. Very resolution. Wow. But seriously, we wanted to give you a few updates from what we’ve been up to, and heck, we’ll throw in a giveaway at the bottom of the post to kick off the new year.

Woah — the last year was a whirlwind. The company went from working out of a 3 bedroom apartment into a real office in January of 2013. That office was outgrown after 10 months, as we’ve only recently moved into our current location in the heart of downtown Boulder.

Additionally, several brave souls have joined our team to help see our company’s vision of creativity, innovation, and forward thinking. Since August, we’ve gratefully welcomed our first four employees to the company: Ken, Jon, Jared, and Josh. While building a team is a very difficult and humbling process, it’s been an exciting adventure; we’re happy to have them join us for the ride (psst… we’re still hiring!).

In a move that took many by surprise, Facebook changed their promotion guidelines. We soon thereafter released a new flash giveaway app as well as some improvements to our current Facebook app to adjust for the changes.

Finally, we enjoyed our first sponsorship roles as a company in several events, including iRetreat, Femworking Conference, and an event here in town known as Boulder Startup Week. Playing a bigger role in the blogger & tech community is definitely new for us and it’s something we’re extremely excited about getting more involved in throughout this upcoming year. 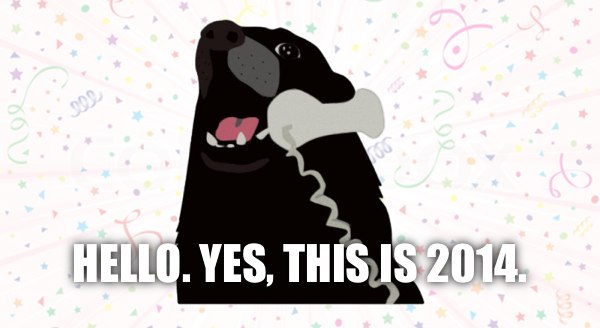 The cat is out of the bag — we’re stepping up to the plate and introducing a new product that will allow bloggers to work with brands in a new and creative way. Since starting the company almost three years ago, we’ve considered the process by which companies and brands choose to work with bloggers and other online influencers a broken process. Stay tuned for that (but sign up here to learn more here).

We’ve also got some fantastic updates for Rafflecopter giveaways in the upcoming months. The amount of folks using Rafflecopter over the last year has tripled; we’re looking to build upon what’s already available. Stay tuned!

Finally, we’ll be making our first conference appearance at the Build Your Blog Conference in early February. We hope this will be the first of many events we attend & hope to see you there!

Giveaway: Tell Us Who Referred You & Enter To Win

Let’s start of 2014 on the right foot. From now through Feb. 10th, you’ll have the chance to enter to win one of several prizes, including an Apple iPad mini, a $200 gift card to Amazon, and a handful of Rafflecopter prize packs.

The rules are simple: tell us who referred you to the giveaway. That’s it.

As you enter, type in your referral’s contact info (email address, twitter account, etc.). When the giveaway is over, we’ll choose one winner at random to win the iPad mini. To sweeten the deal, if you happen to refer the winner chosen for the iPad mini, you’ll walk away with a $200 Gift Card to Amazon.

You’re more than welcome to embed the widget on your blog to gain more referrals. You can grab the widget’s embed code on the giveaway’s share page here. While there is no limit to the number of folks you refer to the giveaway, you can’t refer yourself and your referral must have entered the giveaway in order to count.

Not chosen as the iPad mini winner? Not a problem. Five randomly chosen runner-ups will receive a Rafflecopter prize pack, which includes a 6-month business subscription, a Rafflecopter t-shirt, and a handful of stickers. Good luck!