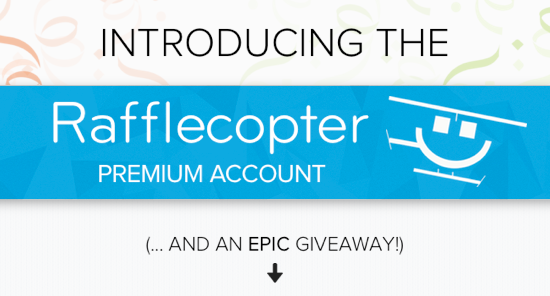 Eighteen months ago, a small group of beta testers got the very first look at Rafflecopter. Today, we’re very excited to unveil to you the newest version of Rafflecopter :)

Managing giveaways with Rafflecopter has just gotten a lot awesome-r. To summarize these most recent updates in three bullet points, here’s the scoop:

Universal features for all. Downloading your giveaway entries have never been easier with the new-and-improved exporting system. You’re also able to customize your giveaway timezones worldwide. And hey – the Rafflecopter Facebook app is now mobile-friendly.

Rockin’ premium upgrades. Want a little extra? You now have the ability to directly integrate into your ConstantContact, MailChimp, and AWeber email lists. We’re thrilled to offer a viral ‘refer-a-friend’ entry option. And how about a real-time analytics dashboard for all your Rafflecopter promotions?

Want the fine details? Learn about all of the new features and upgrades in our recent Rafflecopter features blog post or by checking out our pricing page.

Rafflecopter has always been a work-in-progress since day one :) With the release of these new features, it opens up many new exciting opportunities. With this release acting as a foundation, expect to see many more improvements, new features and promotions in the near future. With that in mind, let’s kick it off! 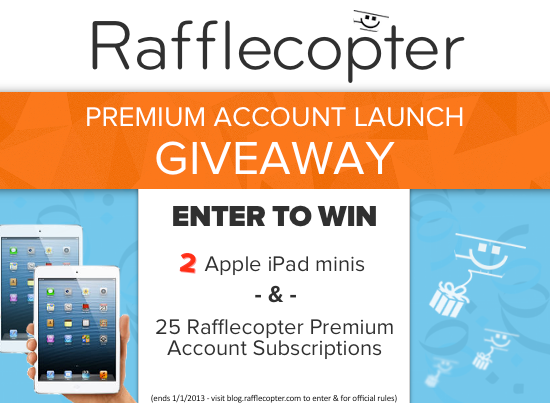 Listen up because this is going to be a lot of fun! Enter to win one of two iPad minis (16GB) or one of the 25 one-month Rafflecopter Premium Account Subscriptions.

Entering is easy through the Rafflecopter widget below, but we want you to give us your best guess to the following question: how many giveaway entries do you think Rafflecopter will have processed all-time by the time the year is over?

That means how many times was an entry in any Rafflecopter widget submitted from May 2011 all the way up to the end of 2012. We won’t know the answer to this question until January 1st, but we can tell you it’s a big number in the millions! In addition to entering and being eligible to win the sweepstakes, the entrant that guesses the closest to the total number of entries without going over will win the second Apple iPad mini.

You can also receive two additional entries by 1) signing up for our MailChimp email list or 2) by being a fan of us on Facebook. In addition, you’ll also be awarded one entry for each friend you refer who enters the giveaway using the new ‘refer-a-friend’ feature. Use the link given to you on the widget after entering the giveaway (max of 10 referrals per entrant). The first entrant chosen who has been verified will receive an iPad mini.

We’re opening this up worldwide – you can enter up until December 31st at 11:59pm MST. If you have any questions, feel free to shoot us an email. Good luck!

UPDATED: Winners Have Been Announced!

Also give congrats to Danny D. for being randomly selected to win the 2nd iPad mini as well as the other 25 winners of a premium account subscription listed in the widget below.

Thanks for all those that have participated – we’ll have another giveaway very soon :)

Enter The Giveaway Below!